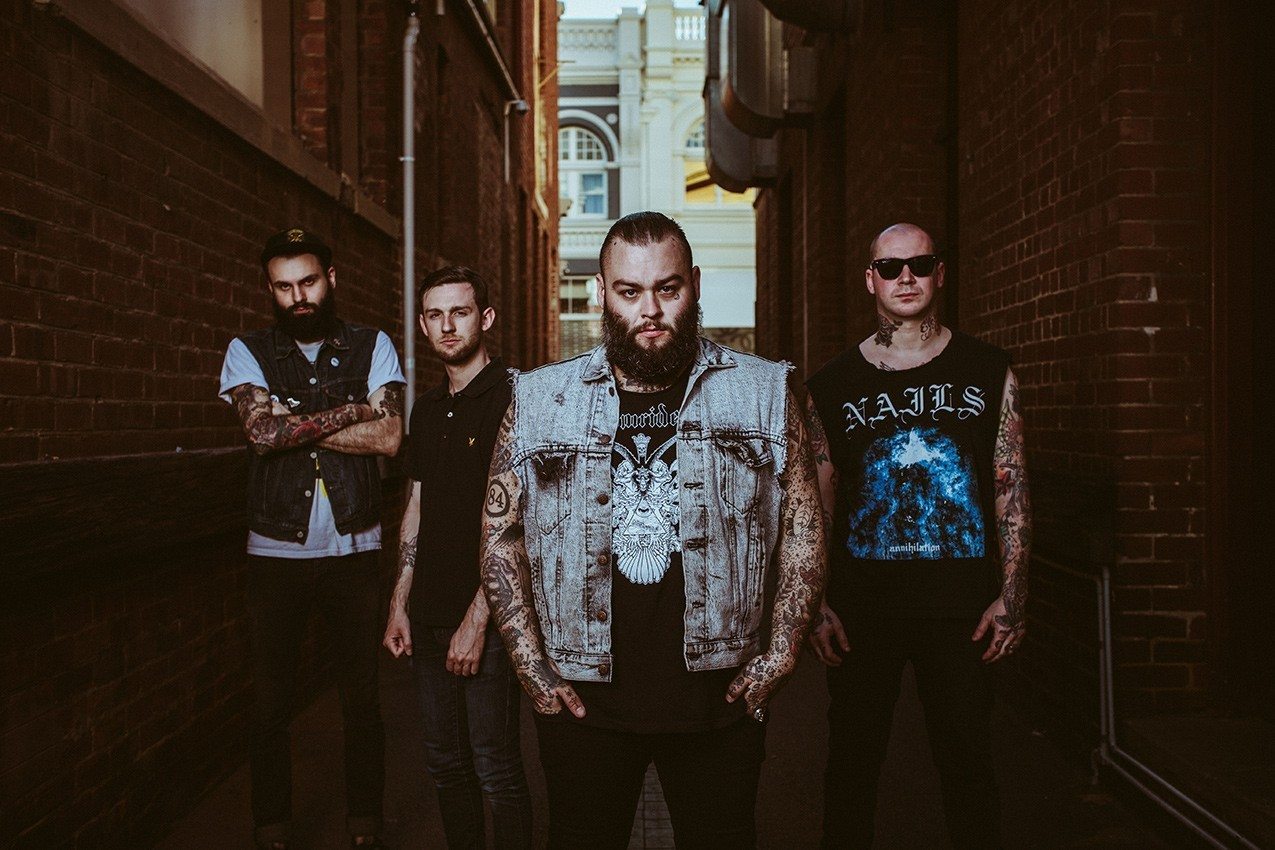 Desolation Sounds is Gallows album number four. Titled after an expanse of water in frontman Wade MacNeil’s native Canada, it features ten songs, runs for 36 minutes and might just be the most bleakly beautiful, weighty and affecting collection of music you will hear this year.

The album represents a new chapter in Gallows career as they move towards their tenth anniversary. Produced by Steve Sears at Titan Studios, Watford, it’s a body of work which builds upon the aggression and passion of the band’s acclaimed catalogue while opening up new horizons for the quartet. It is, says Gallows founding member Laurent ‘Lags’ Barnard, “the record I’ve dreamt about making.”

“I think the album sounds really fearless,” the guitarist explains. “It’s the sound of a band that’s comfortable with playing music together, rather than trying to fit into a certain scene or zeitgeist or any preconceived notion of what the band should be. We just ignored the outside music world and made an album that felt good in our guts.”

This bloody-minded focus has served Gallows well from day one. Hailed as ‘The best British punk band since The Clash’ upon their emergence from the fecund Hertfordshire hardcore scene, the band hammered an adrenaline spike into the body of the British music industry with the release of 2006’s feral Orchestra Of Wolves and 2009’s savage, unflinching state-of-the-nation address Grey Britain, before the departure of original vocalist Frank Carter offered an opportunity to re-assess the chaos wreaked. Re-affirming their commitment to the punk rock cause, the band re-emerged in 2012 with a new vocalist, former Alexisonfire man MacNeil, a new self-titled album, a new label (their own Venn Records) and a new-found sense of self-determination and purpose. Desolation Sounds represents the thrilling next stage of this re-birth.

“With the last album I think we put certain restrictions on the record,” says MacNeil. “We knew that we wanted to make an album that was short and fast and direct, a burst of violent energy. And we did it, and I love that record. But this time around conversations about the future of the band have all but died away and the way we can best honour Gallows fans is by making an honest record, a record that envelops everything that we love. That’s what Desolation Sounds is.”

In crafting the ten songs that comprise Gallows’ fourth album, main writer Barnard looked beyond the borders of the underground punk community and drew inspiration from unexpected sources.

“The biggest influence for me on this record was watching weird American TV, shows like Twin Peaks and True Detective and Fargo, all that off-kilter, slightly eccentric television,” he reveals. “Those series have an atmosphere and ambience that’s unsettling and unique, and I wanted to draw upon that to create an album that balances brutality and beauty in new and challenging ways.”

The result is a collection of songs which expand upon the visceral charge of the uncompromising Gallows sound while incorporating textures, tones and shading which demand a re-definition of the notion of ‘heavy’ music. From the chilling widescreen desolation of the cinematic Cease To Exist (“If I told you this was killing me, would you stop?”) to the oppressive, challenging grind of summer 2014 single Chains (“a song about internal struggle, examining the destructive impulses within us all” explains lyricist MacNeil) through to the fierce ‘talking ‘bout my re-generation’ catharsis of Bonfire Season, it’s an album which transcends expectations and showcases a unit operating at the peak of their creative powers. Bound within there is Thelemic philosophy (93 93), sludge-encased nihilism (Leviathan Rot), snarling punk rock confrontation (Leather Crown), and even a bruised, aching us-against-the-world love song (Death Valley Blue), culminating in the intense, disquieting Swan Song, something of a mission statement for a collective which has always sought to break new ground.

“The idea behind that song is that there is no end to the creative process, and to art,” explains MacNeil, “unless you give up and walk away. It’s about striving and pushing yourself to the next level. I hope I never write that one song which totally sums up our lives, and our existence, I hope that’s a moment I’m always chasing. I’m lucky to live a life where I can make confrontational music, and I’ve been doing that in some capacity since I was 17 years old: I hope to continue that for another 17 years.”

“I think the last record [Gallows] had us moving away from a uniquely British identity when I came on board, and this time we’re kinda taking the Gallows outlook – mondo chaos – to a global level,” the Canadian vocalist continues. “We have a certain way of looking at the world, and because we spend our lives travelling, our perspectives are so much broader than those represented on the earliest records. I think through your own will you create your own world, and the four of us just happen to be quite dark people – there’s no doubt that trouble follows Gallows around! This album is an investigation of that, and as a result it’s more personal and more spiritual than anything before.”

“I hope people will take the time to listen to this record and realise that Gallows aren’t just a band that makes heavy music,” adds Laurent Barnard. “Of all the records so far I think this one is the most musical and accessible we’ve made yet. As a musician there’s always certain artistic ambitions you want to fulfil, and I think with this record we’ve really satisfied those needs. Of necessity, because people live in different countries now, our time together is totally focussed and precious, and there’s no fucking around. Desolation Sounds is the most selfish record Gallows have done, because we’re writing purely to please ourselves, but I also happen to think it’s the best record we’ve ever done.”

Buy the deluxe version of “Gallows” with bonus documentary via